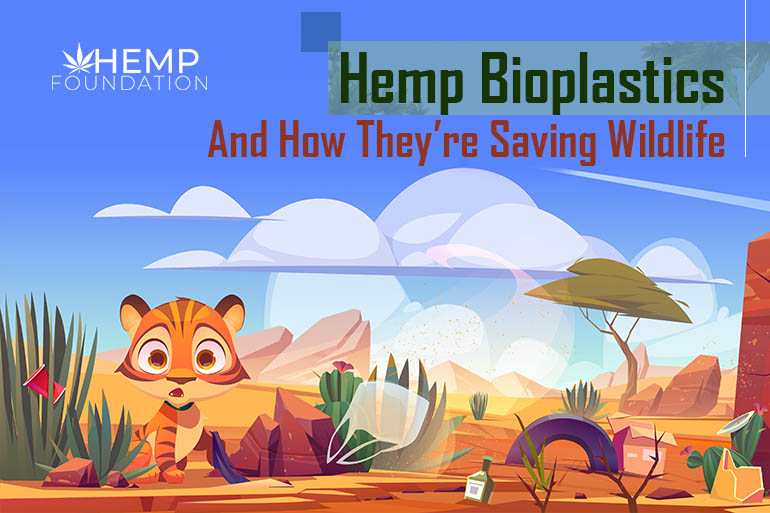 Hemp plastic can rid the world of plastic pollution and save animals. Don’t believe us? Read to know more.

Plastic this and plastic that. We know it’ll end; but when?

Can things change? Can oceanic fish dream of plastic-free waters? Is this the last snake that vomited plastic?  Till when can we tolerate dead Laysan albatross chicks with plastic-lined tummies?

When the echoes of COP26 fizzle out, we’ll realize we’re addicted to the convenience of plastics; the future be damned.

Enter hemp plastic. The eco-warrior we must let into our homes, our cities, nations, and planet.

Hemp is a fibrous plant whose merits run into hundreds. One of them is the ability to provide the main raw material for biodegradable plastic.

What is hemp plastic?

Hemp plastic is a type of bio-plastic that comes from hemp fibers. The fibers consist of cellulose which is an organic polymer. Cellulose is then used to make plastic.

Sure, you can research the science of it yourself. The bottom line is that hemp plastic is biodegradable and compostable.

The biggest one: it’s carbon negative. This means more carbon is taken out of the atmosphere in the plant’s life cycle than is produced. The plant can also prevent soil erosion and reduce water pollution.

Hemp without chemical fertilizers: Chemicals aren’t used even in the production stages of hemp plastic. This makes it a non-toxic plastic that does not contain carcinogens.

Hemp plastic is more recyclable than petroleum-based plastic: Regular plastic is only recycled 2-3 times. Beyond that, the quality of the polymer chain decreases. Hemp plastic can be recycled infinitely without losing its strength. Thus plastic waste can be reduced.

Hemp plastics resist heat: This plastic is about 2.5 times better than polypropylene plastic: So it will generally last longer, creating less waste.

Hemp plastic has a wide application without compromising on any of the qualities of regular plastic.

Hemp plastic: an eco-warrior waiting on the fringes of the earth?

Hemp is biodegradable. Literally, it can disappear without a trace in 3-6 months, after disposal.

The numbers are dire and animals are who is affected the most.

One-third of the food produced globally ends up in landfills. Animals gorge on the food readily available in the landfills.

Unfortunately, animals can’t distinguish between rotting food and plastic. So they chomp on plastics, which ravage their digestive tract and their reproductive system.

Landfills are also changing migration patterns amongst several bird species and causing population explosion, and in some species, a reduction.

Though waste segregation is one way to solve this issue an even better solution is lesser waste production.

Hemp plastics are the perfect stand-in for petroleum plastics to combat this issue. Since it is biodegradable, even if the plastic does end up in a landfill, it will degrade in 6 months. Besides, since hemp plastic can be recycled, there will be less plastic ending up in landfills in the first place.

Plastic is killing our water bodies

It’s no secret that a lot of the plastic we use ends up in the ocean. Improper disposal methods are the main culprit here.

Many deep-sea creatures have been found with plastic in their digestive system. A study led by academics at Newcastle University was done over trenches in the Pacific Ocean. The researchers found animals living over 11 km deep having fibers from plastic or synthetic clothing in their system. This is telling of how deep plastic pollution has permeated the world.

Though there are regulations to curb the use of single-use plastics, it is nearly impossible to clean up the microplastics that have already pervaded water bodies.

Polluted water is the death-sentence for wildlife

Microplastics are chock-full of toxic materials.

When an animal drinks from or lives in polluted water bodies, they end up ingesting the toxins. These toxins are wreaking havoc on the reproductive cycle of marine animals. Plastic pollutants have chemicals called endocrine-disrupting chemicals (EDCs) in them. These cause hormone disruption in animals which has a huge impact on their reproductive and overall health.

One study found a killer whale pod having huge amounts of polychlorinated biphenyls (PCBs) in their systems. This is a banned compound that was used in plastic production till 2004. This pod did not reproduce over the 25-year period in which the study was conducted.

There is a similar effect across the board for many species. Either they are unable to reproduce, or the offspring is born with health conditions that do not allow them to survive.

Ghost gear, that is fishing equipment lost or abandoned at sea, is another big issue for wildlife. Many inquisitorial animals think fishing nets are food. Unfortunately, they figure out the hard way that it is not food but something that could kill them. Whales and dolphins caught in nets sometimes cannot surface and end up drowning.

Hemp nets are the perfect alternative to synthetic fishing nets. They are, in fact, more durable than synthetic nets. Hemp plastic is also toxin-free so if animals do decide to chomp on it, they are less likely to be affected by chemicals.

Plastic in the soil means the future is bleak

After cigarette butts, plastic is the most commonly littered material. The main problem with litter is very straightforward. Animals find plastic on the ground and assume it’s food. This causes intestinal obstruction and poisoning. This in turn leads to malnutrition and painful death.

Microplastic contamination is greatly affecting the soil quality and the microorganisms that live in the soil. We’ve all heard it, earthworms are farmers’ best friends. But it was found that where there were microplastics there weren’t any earthworms. This directly impacts birds that are dependent on earthworms for food.

In some cases, the earthworms end up ingesting the microplastics. Then, when birds eat the worms, the plastic gets into the bird’s system by a process called biomagnification. The microplastic, thus, moves up the food chain affecting every organism that comes in contact with it.

Besides hemp plastic, the hemp plant itself is a potential solution to microplastics in the soil. There is evidence that growing hemp plants rid the soil of pollutants. And because growing hemp does not require chemical fertilizers, the crop is an excellent option to clean the earth.

The need for a sustainable solution is pressing.

Hemp plastic has the potential to be that solution. The barrier between potential and reality is its unfortunate relationship with marijuana. The awareness about the differences between the two crops hasn’t penetrated lawmakers yet. Thus, many countries are hesitant to pass regulations that allow farmers to grow hemp.

Another reason for the continued non-popularity of hemp plastic is its marginal cost increase when compared to petroleum plastic. Though the benefits are wide, industries are reluctant to spend a few extra pennies for a better world.

The need for a change is urgent, and it’s time we all stepped up.

UKHI Pvt Ltd and Hemp Foundation, A Non-profit Organization working on Himalayan hemp research, conservation of indigenous cultivars, and promotion of hemp farming in Uttarakhand and help the farmers market their products.