Bioplastic From Hemp – The Way Out Of Microplastic Menace

Since it began to be mass-produced in the 60s, eight billion metric tons of plastic have been manufactured.

That is a gigantic amount by any measure.

Plastic is an excellent packaging material. It is lightweight, cheap to manufacture, and waterproof. It has no odor and does not react with food.

We are addicted to its use.

Every loaf of bread, every pound of meat, and every box of oatmeal in the supermarket are wrapped in this ubiquitous material.

Manufacturers love to use plastic bubble wraps as a shock absorber for brand new laptops and smart devices. Water bottles, toys, pens, straws, and even cheap table lamps – the list is endless. 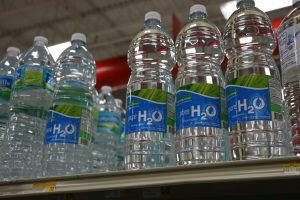 But now we are gradually reaching a tipping point. Microplastics are an existential threat and humankind desperately needs a way out.

The biggest strength of plastics is also its biggest drawback. The material is immensely strong. A plastic bag weighing a few grams can carry several kilograms of groceries.

It is this durability that is a problem when it comes to disposing of it. 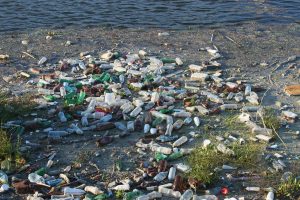 If you bury a plastic bag in your backyard, it can take many centuries to degrade.

There is further bad news. Experts have estimated that 10% of the plastic that we throw away has made its way to the oceans.

Gigantic garbage patches are floating around the pristine blue seas. The Great Pacific Garbage Patch floating between California and Hawaii is thrice the size of France. That is huge.

To make an awful story worse, though plastic does not degrade, it breaks up into smaller pieces.

The sun, wind, and rain stress it enough so that the larger pieces break into smaller fragments a few centimetres long. These smaller pieces react with salt water to become brittle and break into even tinier scraps no more than 5 millimetres across.

This is how microplastics are born.

How big is the problem?

There is a literal flood of microplastics and we have no idea of the long-term impact.

Unmanned submarines have encountered it at the bottom of Marianas Trench in the Pacific Ocean, the deepest place on Earth.

Scandinavian climatologists from the Helmholtz Center for Polar and Marine Research have found huge amounts of plastic in snowfall at Svalbard.

Even the Arctic ice has microplastics embedded inside it. Scientists from the US have seen it in ice samples from the Northwest Passage which links the Atlantic and the Pacific Oceans.

Why are they so harmful?

Not much is known about its long-term effects. What little is known is hair raising.

Fish mistake it as food and with no sense of taste ingest it. An aquatic animal takes about two weeks to pass plastic through its system.

If it gets enmeshed in their digestive tract, it stays lifelong.

Since seafood forms a large part of the diet in most nations, we are without any doubt consuming plastic.

The coffee cup you threw into the trash five years back is probably now trying to maneuver past your ileum.

Goes without saying that the long-term health effects can not be anything but detrimental.

Bioplastics from hemp—a beacon of light on the horizon

The future is not all bleak.

Enterprising souls here and there are trying to capture the genie and put it back into the bottle.

The solution is bioplastics.

Traditional plastics are made as a byproduct of petroleum refining. Hydrocarbons provide an unending supply of polymers. Polymers are a group of very large molecules that can hold their shape and are waterproof.

On the other hand, the fundamental molecule for the manufacture of bioplastics is cellulose. Cellulose occurs in every plant, but some have more than others.

Not only does it look like plastic and have nearly identical properties, but has the advantage of being 100% biodegradable.

Hemp bioplastic is made from cellulose. The stalk of the hemp plant is an ideal source for sourcing it on an industrial scale.

The miracle material is already in use by the agriculture and textile industry. It is estimated that the EU nations, in their effort to become clean, green sustainable economies, will divert 10% use of plastics to bioplastics within a decade. 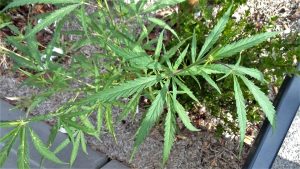 What is the main disadvantage of hydrocarbon plastics? It has a nearly unending shelf life.

We throw away a bottle of mineral water after a few gulps. Have you ever imagined how long it lasts? At least a thousand years and maybe more. After all, plastics have only been around for seven decades and no one knows for certain. All that we know is that all the plastics ever made still exist somewhere.

How long does it take hemp plastic to decompose?

Pause for applause. Hemp plastic decomposes quickly, in at most six months.

You throw a bioplastic bottle into the compost heap and when you return after a year, nothing is left. How does hemp plastic decompose so fast? Bacteria have been at work and digested the cellulose completely.

To be fair, the short time frame is true of any material originating from a biological source.

This also provides us with the opportunity to recycle it. Ordinary plastics can also be recycled but not without releasing toxic fumes. No such problem with hemp bioplastics.

#2. Hemp plastics do not poison us

Have you ever seen crude oil?

Most of us have seen a black viscous substance wash up on beaches after an oil tanker collision and choke pelicans and seagulls to death.

Can anything made from that gooey gunk be non-toxic? One does not have to be a scientist to answer the question.

Stand next to a gasoline pump and you would feel heady after a few seconds. Imagine the number of pollutants released into the air when 200 million tons of plastic are produced annually.

Hemp fields are leafy green as far as you can see. No different from maize or corn or sugarcane. It is easy to access cellulose from the stalk and make bioplastics from it without poisoning ourselves to death first.

Surprised? It is quite astonishing since we have come to see synthetic fibers as the strongest substance apart from steel and titanium.

Most of the use of plastic is due to its rigidity. Plastic can be injected into a mold, and when dry, can withstand immense stresses.

But now the miracle material from the WWII era has been upstaged. Laboratory tests have shown that bioplastics are far stronger than we imagine.

In a way, it’s old wisdom being rediscovered. In 1941, Henry Ford used bioplastics to make car fenders. So sturdy was his creation that publicity material shows him taking a whack at it with a sledgehammer.

Due to its unbelievable strength, hemp can be used for subsidiary construction materials. It is easy to replace boards and dry walls with bioplastic sheets.

In the near future, it is quite possible to make small dwellings from hemp plastic.

Timber has long been phased out of carriage work. It was replaced by dashboards made from acres of ugly plastic.

It is expected that hemp plastic would replace quite a few car parts soon. Big companies such as GM and Chrysler are putting research dollars at work trying to integrate the new material. 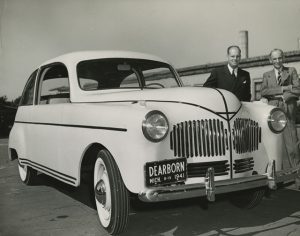 It also has the plus of making the vehicle more eco-friendly and reducing the carbon footprint of manufacture.

Conventional paper is made from a few species of quick-growing bamboo and grass. Pulp made from hemp stalk can easily be used to make paper. The technology exists, but a sufficient supply of hemp is yet lacking. It is expected that in a few years hemp bioplastic production will ramp up.

I don’t know about you, but I certainly have no wish to eat and even breathe microplastics.

No doubt it has severe health implications after a few years. I can’t wait a few years and find it gross today.

The fascination with plastic has to end. Of course, it will take years or maybe even decades to phase it out completely and replace it with hemp bioplastic packaging.

The effort has to begin now and in earnest. We owe it—to us and the planet.

UKHI Pvt Ltd and Hemp Foundation, A Non-profit Organization working on Himalayan hemp research, conservation of indigenous cultivars, and promotion of hemp farming in Uttarakhand and help the farmers market their products.